Throughout Southeast Asia, the dog meat trade is prevalent. Our work in Vietnam, Cambodia and Indonesia has revealed acts of unbelievable cruelty and recently, FOUR PAWS investigations uncovered a secretive network in Borneo.

While most know of the island of Borneo for its majestic wildlife, beautiful jungle canopies and extensive ecosystems, there is a hidden and horrendous trade behind closed doors. For years, we have been supporting the rescue and treatment of stray animals together with our local partner, Pro Natura, in East Kalimantan. During this time, we witnessed countless dogs disappear without a trace. Our recent investigation into the dog meat trade in Borneo, Indonesia, the first-ever in Indonesia, revealed thousands of dogs were being killed in cruel ways every year, snatched from the streets and their homes.

It has taken us some time to uncover the scale of a network that is responsible for trading, slaughtering and selling of thousands of dogs. And sadly, what we have learnt is that the methods are brutal.

Dogs are often caught using poison such as potassium cyanide. Once unable to fight back, their mouths are tightly bound shut and they are shoved into thick burlap sacks. After being trafficked to slaughterhouses and restaurants, the dogs are bludgeoned to death, using a brick or metal pole. These words are enough to send shivers down your spine.

“After witnessing the cruelty of the dog meat trade and the way these dogs got slaughtered, we couldn't sleep or eat for days. It shocked us deeply and we knew we have to do something. We have to rescue as many dogs as possible from this hell!”

End the dog and cat meat trade in Southeast Asia

During the investigation, our team was able to rescue seven souls who were moments away from their barbaric deaths. Along with these, one rescued heavily pregnant female gave birth to four puppies. Four new lives who by some lucky miracle have a chance at life. See our flip cards below on a few dogs we have helped so far.

In order to keep the rescued dogs safe, FOUR PAWS initially partnered with local rescue, Balikpapan Cat Rescue Foundation, who provided temporary emergency housing for the dogs. However, there is now an urgent need to relocate them due to complaints from the local community, who are less than tolerant of barking dogs.

We have therefore decided to build a new enclosure for the pups, who are in desperate need of a safe haven. The enclosure will also have space for up to 20 additional rescued dogs in need of emergency shelter. And now, we need your help to make this happen!

Broron entered our lives during our dog meat investigation: Handed to us while tied up in a sack, his mouth tightly bound with a raffia string. He’s just a young pup, sweet and friendly. Read more here.

3-month-old pup Boni had fallen very ill from the highly-contagious and deadly parvovirus. His owner was devastated and asked for our help. At the medical centre in Borneo, we gave him the best possible treatment. Read more here.

We intend to build an enclosure, where the already rescued dogs and more can thrive away from the clutches of dog meat traders.

The kennel enclosure would be located close to our local stray animal care programme partner, ProNatura, which is around 23 km outside of the city of Balikpapan. The land is in an area surrounded by farmland and rainforest, so the rescued dogs will be given opportunities to go for nice walks and disturbing neighbours won't be an issue. The facility will allow staff to help rehabilitate and treat rescued dogs, which is vital to prepare them for local adoption.

Please secure a future for these lucky dogs and donate towards their safe place. 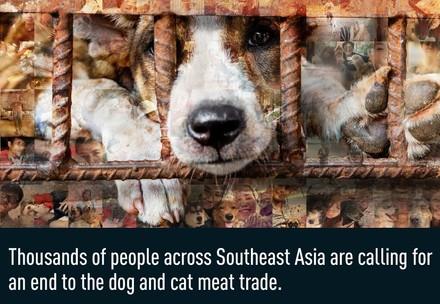 What You Can Do to Help End the Dog and Cat Meat Trade?

You can make a difference 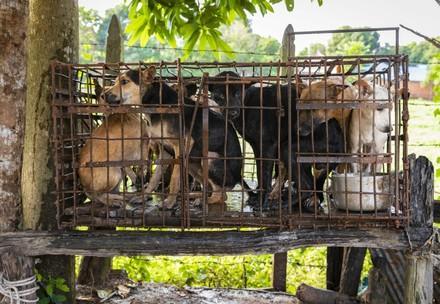 Disease, Death and Dog Meat – The Public Health Risk that no one wants to talk about 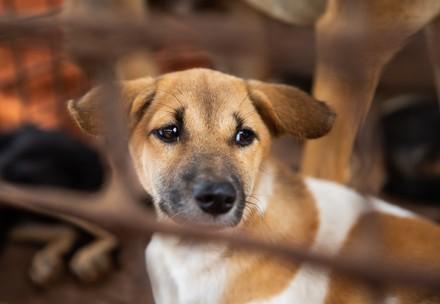 One of the 15 dogs saved from the dog meat trade in rural Cambodia, Daisy now has the chance at a new life in the USA.